The Cause of Terrorism?

It struck me while writing the previous article how pervasive is the idea that things have a single cause, but we have no reason to believe this, and we know it. To create fire I need to bring together fuel, heat and air. Take any of these away, as any fire fighter will tell you, and you will no longer have fire: all of these causal factors need to be present. So many arguments swing on the fallacy that things have to have single causes: whether terrorism is caused by unscrupulous people and their malignant ideology or attacks on other people’s countries and cultures. Plainly they are both causal factors—everyone feared an increase in terrorist attacks after the invasion in Iraq and in England cash machines tell you to be wary of suspicious packages while ATMs in the Republic of Ireland don’t carry any such warning. Invading other people’s countries is reasonably good predictive indicator that some of the people being so attacked (and they may not reside in the countries being attacked but merely identify with them) will seek to reply in kind by attacking the countries doing the attacking at their vulnerable points. Clearly violent exploitative ideology is necessary too.

While all the causes need to come together to bring about a terrorist attack, it makes sense for us to focus on the causal factors that we control and are responsible for. Once we address these it will become a lot easier (and much more effective) to ask others to address their own contribution to the problem.

Faith and Reason in the Dharma

[This article is quite technical in parts but as I am not qualified to write on Buddhist philosophy I have been careful to try and repeat what my teachers have told me, but the reader should investigate other sources before placing too much weight on what I say here. If you find this topic interesting I recommend reading the compact Four Noble Truths, with the original teachings available on line in four parts: 1, 2, 3 & 4.]

In the Dalai Lama’s recent Nottingham teachings (see this article for a report) H. H. reminded us of the way faith and reason works in Buddhism and I think it is worth saying a bit about this as there is much confusion about the proper place of faith in religion. In the case of Buddhism it is caught up with epistemology and causation so please bear with me; it does come together in the end. (Incidentally I recommend Pope John Paul’s Fides et Ratio encylical on how faith and reason work together in Catholocism.) Buddhism classifies knowledges into three categories: truths that are manifestly true and can be verified by direct sense perception, truths that can be verified through reasoning and truths that require the testimony of an authority. For example, to get a general picture of the weather here in Madrid I can just look outside the window, but I can tell through direct sense perception what is happening with the wind as I could outside (by feeling the movement of the air), but I can see from the motion of the trees that it is quite windy. However I would have to rely on some authority to tell me about the weather in Brighton. Note that the boundary between the first two categories isn’t always clear as the sight of the trees is a direct sense perception and the inferential step from here to wind is trivial, but you get the idea.

END_OF_DOCUMENT_TOKEN_TO_BE_REPLACED

Liberal Posturing on the Media? (And the Real Deal)

I am really not sure what to make of all of the outrage that is orbiting around the blogosphere over the McClellan book tour (e.g., Kagro X@Kos and Huffington).  In this MSNBC interview McClellan seemed to make perfect sense though he clearly has some explaining to do.

There does seem to be an element of posturing that makes me suspicious.

Meanwhile some people are trying to work out what is happening with the next war.  Commander Huber has another excellent article at the Pen and Sword, dissecting the contours of the media packaging of the next war (or possibly not).

I think I have read one of the silliest blog article ever and it has some stiff competition. It is by Brendan O’Neill on Comment is Free, an attack piece on the Dalai Lama with about as much coherence as a typical Beijing press release on the subject. O’Neil is clearly one of these Troll bloggers using the Malkin/Coulther business model; Stephen Bainbridge (by way of Andrew Sullivan):

Malkin and Johnson seem to have internalized what I call the “Ann Coulter Business Model.” It’s a familiar concept, based on a couple of simple propositions. First, there is no such thing as bad publicity. Second, as the sage Charles Barley Barkley observed, the meek may inherit the earth, but they don’t get the ball. To stand out from a crowd, you’ve got to be provocative. You’ve got to make your friends—and, almost as important, if not more so, your enemies—keep tuning in to see what you’re going to say next.

So the reader will understand my reluctance to feed these kind of trolls with links.

It isn’t as if it is impossible to criticise the Dalai Lama. As well as a spiritual leader he is a political leader and it has become fashionable to judge him on results: the number of Tibetans liberated from the heal of the political wing of the People’s Liberation Army (i.e., zero). The narrative runs that he missed some fabled window to cut a deal with the Chinese and his do-goody peace-rhetoric is great for cultivating street cred among the hippies that turn up at Dharmsala but not so effective in the real world that adults live in.

END_OF_DOCUMENT_TOKEN_TO_BE_REPLACED

The Dalai Lama and The Interdependent Nature of Reality

[A series of articles reviewing blogs and websites (here The Dalai Lama) on my blog-roll; see the about page.] 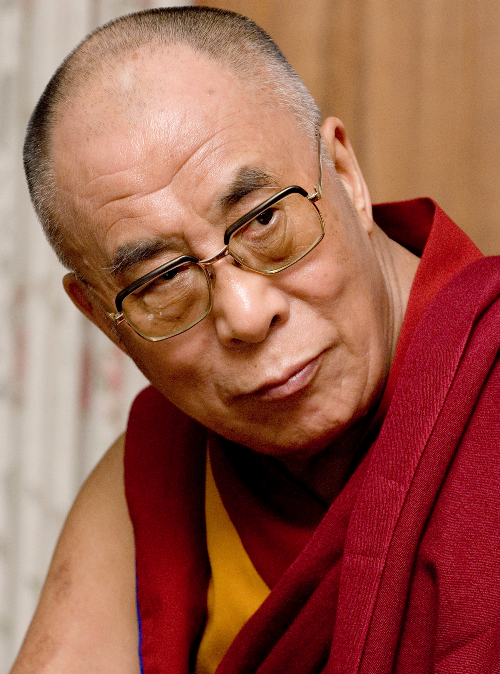 Mark Vernon has provided some reflections on the Dalai Lama after his recent talk in the Royal Albert Hall and I have just come from the five days of teachings in Nottingham completed yesterday so I thought I would add some of my own.

It was amusing listening to the area announcers, accustomed as they are to making announcing the Boyzone and ice dancing, tripping over ‘His Holiness’ (but by the end they had it). While the Dalai Lama is famous for the formalities on going into exile he has contrived that a deference-averse secular people use this title. Any publicity agent would likely have wet dreams at the prospect of being able to pull this off, and bear in mind that this Buddhist monk has nothing other than his own personal qualities and his Buddhist tradition to reccomend him—no navy, not even a country). This is quite a neat trick and I really do have to laugh at the likes of Nicholas Kristof dispensing advice to the inept representative of the Tibetan people and his fight against one of the most populous and powerful nations on earth, known for habitually throwing its weight around on the issue.

END_OF_DOCUMENT_TOKEN_TO_BE_REPLACED

David Baddiel has an interesting take on both Jane Austen and the way she is being depicted in bioepics, slyly suggesting that they may have it about right for popular children’s entertainment, making a refreshingly bold case for her merit that avoids the usual apologetics and condescension.

Because here’s the thing about Jane Austen. She was a very great genius. She is possibly the greatest genius in the history of English literature, arguably greater than Shakespeare. And her achievement is not that much to do with love, although that was her subject matter. It’s to do with technique. Before her there are three strands in English fiction: the somewhat mental, directly-reader-addressing semi-oral romps of Nashe and Sterne and Fielding; the sensationalist Gothic work of Horace Walpole and Ann Radcliffe; and the romances of Eliza Haywood and Fanny Burney.

However great these writers are, none could be read now and considered modern. When Austen gets into her stride, which she does very quickly with Sense and Sensibility, suddenly, you have all the key modern realist devices: ironic narration; controlled point of view; structural unity; transparency of focus; ensemble characterisation; fixed arenas of time and place; and, most importantly, the giving-up of the fantastical in favour of a notion that art should represent life as it is actually lived in all its wonderful ordinariness. She is the first person, as John Updike put it: “to give the mundane its beautiful due”, and her work leads to Updike as much as it does to George Eliot.

I have no idea how a mainly home-educated rector’s daughter came by all that, but I know that imagining her as a kind of acerbic spinster flattens out this genius. It becomes all about the subject matter and not at all about the huge creative advance her work represents.

END_OF_DOCUMENT_TOKEN_TO_BE_REPLACED

If anything can be drawn from Lady Susan, then even Jane’s letters to Cassandra–albeit personal—were in some way performative, meant to be read, projecting an idea of herself Cassandra deemed publicly inappropriate. Privacy is obviously sacred as it is today, but I wonder whether you might dig speculating on what the state of privacy was, then. Perhaps even Regency folk felt privacy was under threat, like us, when private knowledge became public knowledge at ever increasing rates. I don’t know.

I have always assumed that the Austen’s were highly concerned with privacy, as were the gentry generally. As we have become more liberal socially there has been less of a need to protect privacy. Why should this be? I think you can see the answer in Austen’s novels, where there is an interesting relationship between manners and ethics, reputation and integrity, all bound up in the idea of ‘character’.

END_OF_DOCUMENT_TOKEN_TO_BE_REPLACED

Peace & Wisdom
Create a free website or blog at WordPress.com.